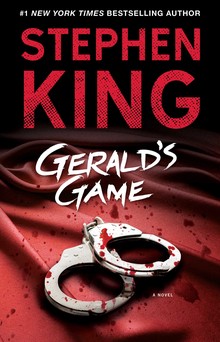 Now a Netflix movie directed by Mike Flanagan (Oculus, Hush) and starring Carla Gugino and Bruce Greenwood. Master storyteller Stephen King presents this classic, terrifying #1 New York Times bestseller. When a game of seduction between a husband and wife ends in death, the nightmare has only begun…“And now the voice which spoke belonged to no one but herself. Oh my God, it said. Oh my God, I am all alone out here. I am all alone.” Once again, Jessie Burlingame has been talked into submitting to her husband Gerald’s kinky sex games—something that she’s frankly had enough of, and they never held much charm for her to begin with. So much for a “romantic getaway” at their secluded summer home. After Jessie is handcuffed to the bedposts—and Gerald crosses a line with his wife—the day ends with deadly consequences. Now Jessie is utterly trapped in an isolated lakeside house that has become her prison—and comes face-to-face with her deepest, darkest fears and memories. Her only company is that of the various voices filling her mind…as well as the shadows of nightfall that may conceal an imagined or very real threat right there with her…