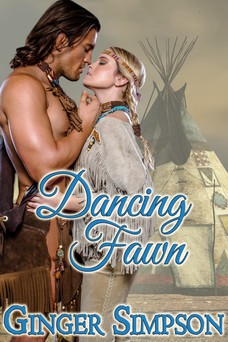 Grace Cummings’ family is killed and she’s taken captive by a war party of young Lakota’s hungry to fight the white men encroaching on their sacred black hill; land granted them in a treaty with the government. The brave responsible for leading the war party and Grace’s captor is shunned by the tribe for drawing attention to their band and leaves the village, giving Grace to Little Elk, the nephew of the chief. With the help and guidance of another white woman in camp, Green Eyes, wife of the chief, Grace learns important facts about the tribe and accepts her given Lakota name, Dancing Fawn… and the love of Little Elk. While the warriors are away joining with other tribes to fight the war brought upon them by the young warriors, white soldier attack the camp, killing only women, children, and old men. Dancing Fawn is discovered, identified as a white captive and forced to return with the soldiers to Fort Sully. Tied hands and constant guarding display she’s not going voluntarily. Back in civilization and under the watchful eye of the Colonel’s wife, Fawn must decide where her heart truly lies.