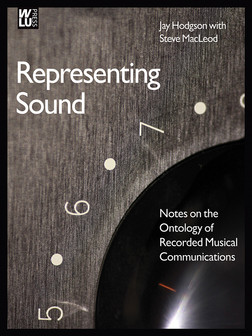 Representing Sound : Notes on the Ontology of Recorded Musical Communications

The first title in the Laurier Digital series. Representing Sound elucidates the base technical ontology, the machine essence, of every recorded musical communication. In so doing, it suggests the broad contours of an unprecedented theoretical basis for considering recording practice that posits no fundamental relationship between it and live performance. Representing Sound thus complicates common conceptions of sound to include different ontological states. This seemingly simple notion–that the acoustic phenomena we encounter in concert are, by nature, different from those we encounter when we listen to records–should have profound consequences for the way everyone, from musicologists to rock stars, considers recording practice. In the tradition of books like Marshall McLuhan’s and Quentin Fiore’s The Medium Is The Massage (1968), Representing Sound sets its text within more than one hundred original visual artworks, each designed to reinforce the essay’s broader creative resonances. This allows readers to approach the larger ontological argument either atomistically (i.e., on a frame-by-frame basis) or holistically, depending on their creative or analytic needs. In this way, Representing Sound provides a possible model for creative scholarly work in the impending post-book era.