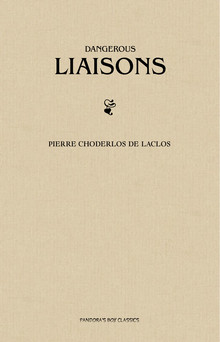 The complex moral ambiguities of seduction and revenge make “Dangerous Liaisons” (1782) one of the most scandalous and controversial novels in European literature. Its prime movers, the Viscount de Valmont and the Marchioness de Merteuil — gifted, wealthy, and bored — form an unholy alliance and turn seduction into a game. And they play this game with such wit and style that it is impossible not to admire them, until they discover mysterious rules that they cannot understand. In the ensuing battle there can be no winners, and the innocent suffer with the guilty. The Marchioness de Merteuil and the Viscount de Valmont are creations without precedent. They are the first [in European literature] whose acts are determined by an ideology. —André Malraux One of the two greatest French novels. —André Gide What really keeps “Dangerous Liaisons” potent after two hundred years is not so much its depiction of sex as its catalog of corruptions, including but not limited to the corruption of language by polite cant and the corruption of morals by manners. It implicates a whole society so founded on falsehood that a single act of emotional truth is tantamount to an act of subversion. —Luc Sante In many respects, Laclos is the perfect author: he wrote, at around the age of 40, one piece of fiction, which was not merely a masterpiece, but the supreme example of its genre, the epistolary novel; and then he troubled the public no further. —Christopher Hampton