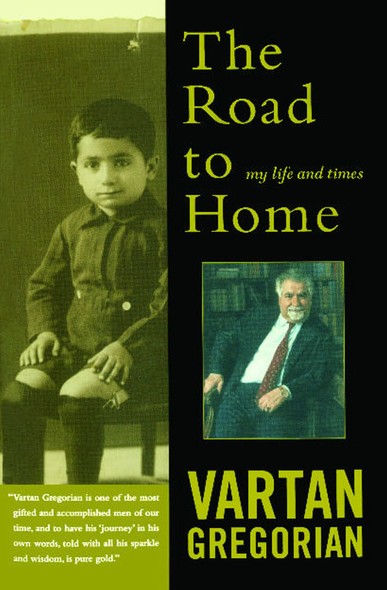 The Road to Home : My Life and Times

Vartan Gregorian's tale starts with a childhood of poverty, deprivation, and enchantment in the Armenian quarter of Tabriz, Iran. As the world reeled from depression into six years of warfare, his mother died, leaving his grandmother Voski as the loving staff of his life. Through unlettered example and instruction, he learned about the first of his many worlds: the strenuousness required for survival, the fairy tale that explained existence, the place and name of his own star in the night sky, how to maneuver as a member of a Christian minority in a benevolent Muslim kingdom, the beauty and inspiration of Armenian Church liturgy, the exciting foreign world of ten-year-old American westerns, the richness of life on the streets.

He learned the magic of the innumerable worlds he could find in books -- and he wanted to visit them all. As the spell books cast on him grew more powerful, so did the constraints imposed by his father's indifference to his dreams of redirecting his life through learning.

So, one day when he was fifteen years old, he presented himself at an Armenian-French lycee in Beirut, Lebanon, to start the arduous task of becoming a person of learning and consequence.

This book tells not only how he reached that school but also about the many people who guided, supported, taught, and helped him on an extravagantly absorbing and varied journey from Tabriz to Beirut to Palo Alto to Tenafly to London, from Stanford University to San Francisco State University to the University of Texas at Austin to the University of Pennsylvania to the New York Public Library to Brown University and, currently, to the presidency of Carnegie Corporation of New York.

With witty stories and memorable encounters, Dr. Gregorian describes his public and private lives as one education after another. He has written a love story about life.