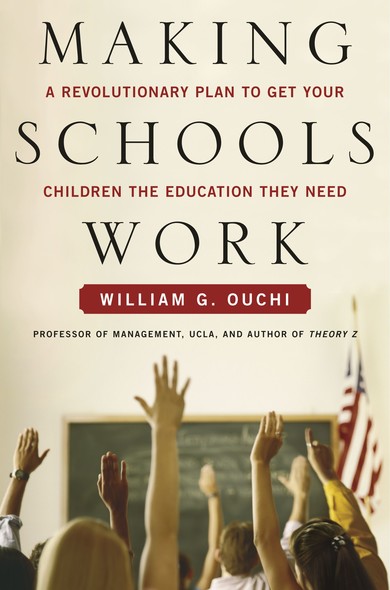 Making Schools Work : A Revolutionary Plan to Get Your Children the Educ

Introducing a bold, persuasive new argument into the national debate over education, Dr. William Ouchi describes a revolutionary approach to creating successful public schools.
This program has produced significant, lasting improvements in the school districts where it has already been implemented. Drawing on the results of a landmark study of 223 schools in six cities, a project that Ouchi supervised and that was funded in part by the National Science Foundation, Making Schools Work shows that a school's educational performance may be most directly affected by how the school is managed.
Ouchi's 2001-2002 study examined innovative school systems in Edmonton (Canada), Seattle, and Houston, and compared them with the three largest traditional school systems: New York, Los Angeles, and Chicago. Researchers discovered that the schools that consistently performed best also had the most decentralized management systems, in which autonomous principals -- not administrators in a central office -- controlled school budgets and personnel hiring policies. They were fully responsible and fully accountable for the performance of their schools. With greater freedom and flexibility to shape their educational programs, hire specialists as needed, and generally determine the direction of their school, the best principals will act as entrepreneurs, says Ouchi. Those who do poorly are placed under the supervision of successful principals, who assume responsibility for the failing schools.
An essential component of this management approach is the Weighted Student Formula, a budgetary tool whereby every student is evaluated and assessed a certain dollar value in educational services (a non-English-speaking or autistic student, or one from a low-income family, for example, would receive a higher dollar value than a middle-class student with no special needs). Families have the freedom to choose among public schools, and when schools must compete for students, good schools flourish while those that do poorly literally go out of business.
Such accountability has long worked for religious and independent schools, where parents pay a premium for educational performance. Making Schools Work shows how the same approach can be adapted to public schools. The book also provides guidelines for parents on how to evaluate a school and make sure their child is getting the best education possible.
Revolutionary yet practical, Making Schools Work shows that positive educational reform is within reach and, indeed, already happening in schools across the country.