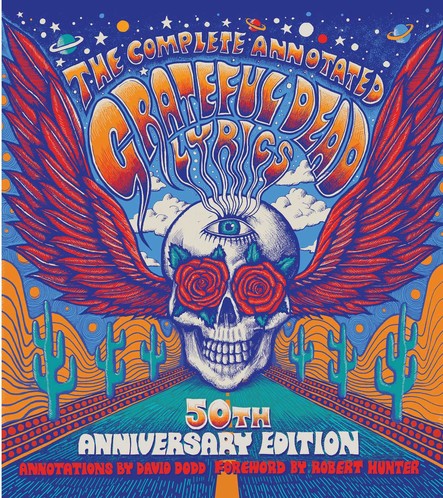 Celebrate the fiftieth anniversary of the most popular and enduring band ever: “Even the most hardcore Deadheads will be impressed by this obsessively complete look at the Grateful Dead’s lyrics” (Publishers Weekly).

The Complete Annotated Grateful Dead Lyrics is an authoritative text, providing standard versions of all the original songs you thought you knew forwards and backwards. These are some of the best-loved songs in the modern American songbook. They are hummed and spoken among thousands as counterculture code and recorded by musicians of all stripes for their inimitable singability and obscure accessibility. How do they do all this? To provide a context for this formidable body of work, of which his part is primary, Robert Hunter has written a foreword that goes to the heart of the matter. And the annotations on sources provide a gloss on the lyrics, which goes to the roots of Western culture as they are incorporated into them.

An avid Grateful Dead concertgoer for more than two decades, David Dodd is a librarian who brings to the work a detective’s love of following a clue as far as it will take him. Including essays by Dead lyricists Robert Hunter and John Perry and Jim Carpenter’s original illustrations, whimsical elements in the lyrics are brought to light, showcasing the American legend that is present in so many songs. A gorgeous keepsake edition of the Dead’s official annotated lyrics, The Complete Annotated Grateful Dead Lyrics is an absolute must-have for the fiftieth anniversary—you won’t think of this cultural icon the same way again. In fact, founding band member Bob Weir said: “This book is great. Now I’ll never have to explain myself.”