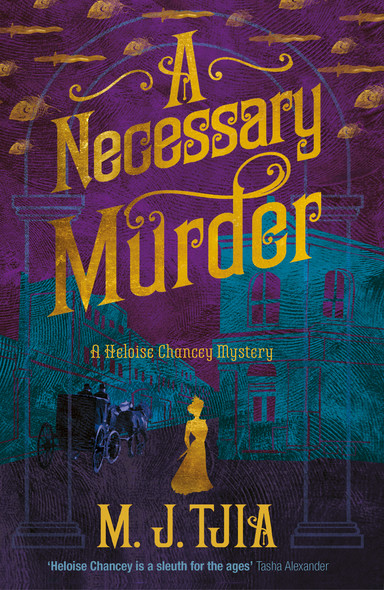 Move over Shelock Holmes... the latest from detective and former courtesan Heloise Chancey...Stoke Newington, 1863: Little Margaret Lovejoy is found brutally murdered in the outhouse at her family’s estate. A few days later, a man is cut down in a similar manner on the doorstep of courtesan and professional detective Heloise Chancey’s prestigious address. At the same time, Heloise’s maid, Amah Li Leen, must confront events from her past that appear to have erupted into the present day. Once again Heloise is caught up in a maelstrom of murder and deceit that threatens to reach into the very heart of her existence. In this second instalment of the Heloise Chancey Mysteries, M.J Tjia brings us another enthralling historical crime where the twists and turns are as numerous and dark as the London streets which serve as their setting.REVIEWS‘Full of lush historical detail and brimming with breathless suspense, A Necessary Murder is a perfectly splendid read. Heloise Chancey is a sleuth for the ages,’ Tasha Alexander ‘A Necessary Murder is dark and terrifying with a compelling heroine. I couldn't wait to return to the world of Heloise Chancey,’ Sarah Ward‘Another clever and compelling read by M.J. Tjia. This expertly written historical crime novel weaved an evocative story that put my life on hold until I finished the very last page,’ Caroline Mitchell‘As with the first in this series, Tjia captures the contrasting atmosphere of mid-Victorian London to great effect – the opulence of Mayfair as before, but this time exploring Limehouse and the East India Dock Road. As a reader we are there with all our senses stimulated by the writing,’ David Evans‘Well-crafted… strong prose and plotting’ Publishers’ Weekly‘An enthralling historical crime story, where the twists and turns are as dark as the streets of Limehouse and the East India Dock, where it is partly set’ Crime ReviewBOOKS BY M.J. TJIA
She Be Damned
A Necessary Murder
The Death of Me