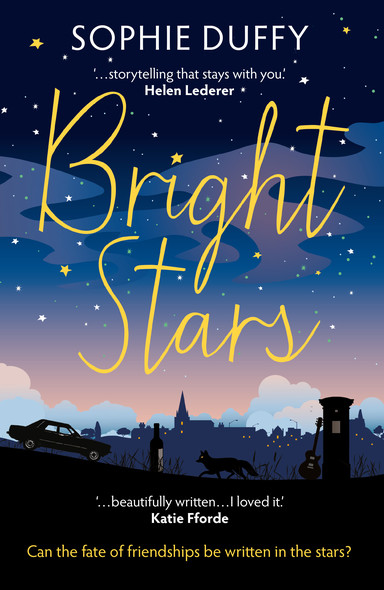 Longlisted for the Guardian Not the Booker prize 2016

'Bright Stars is beautifully written, has original, endearing characters and a story that pulls you along. I loved it.'
-Katie Fforde

Cameron Spark's life is falling apart.
He is separated from his wife, and awaiting a disciplinary following an incident in the underground vaults of Edinburgh where he works as a Ghost Tour guide. On the day he moves back home to live with his widowed dad, he receives a letter from Canada.
It is from Christie.Twenty-five years earlier, Cameron attends Lancaster University and despite his crippling shyness, makes three unlikely friends: Christie, the rich Canadian, Tommo, the wannabe rock star and Bex, the Feminist activist who has his heart.
In a whirlwind of alcohol, music and late night fox raids, Cameron feels as though he’s finally living.Until a horrific accident shatters their friendship and alters their futures forever.
Christie’s letter offers them a reunion after all these years.
But has enough time passed to recover from the lies, the guilt and the mistakes made on that tragic night?
Or is this one ghost too many for Cameron?


'A wonderful and witty page turner, combined with compelling storytelling that stays with you.'
-Helen Lederer